A Field Guide to the Cables Around the Office 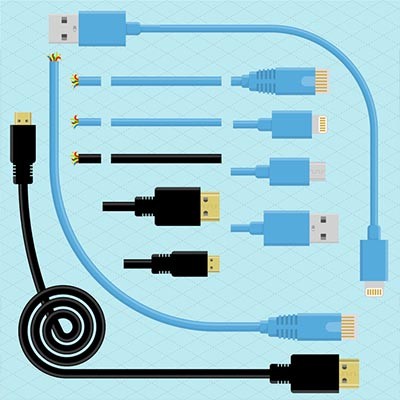 If there’s one thing you likely have plenty of in your office, it’s cables. Each device you regularly use probably has compatibility with at least one kind of cable… but can you identify them and what they do? Below, we’ll go over a few common cable types so that you’ll be able to do just that.

The Universal Serial Bus cable connection is the most common around the world, as most accessories and peripherals leverage the USB port. There are also many different versions of USB technology, each supported by different shaped connections.

Type B connections also support USB 1.0, USB 2.0, USB 3.0, and USB 3.1. Far less common than other USB connections, they were once used primarily to connect a printer or similar device to a computer. While still utilized, they are slowly being phased out.Mini and Micro both support USB 2.0.

Mini USB connections can commonly be found on older gadgets, having been more or less replaced by:

Micro-USB, which in turn is being phased out by Type C connections.

Type C connections (also known as USB-C) support USB 3.1, USB 3.2, and the upcoming USB 4 standard. Moving forward, it is very likely that the USB-C connection will be increasingly popular. This is because USB 4 will use this connection type, and in addition to being backwards-compatible with all generations of USB, it can support much faster data transfers.

One of the oldest computer monitor cables, Video Graphics Array cables have become less popular as its analog video signal has been abandoned in favor of digital. Nevertheless, there is likely to be a VGA port on your video card or display.

At the turn of the century, VGA cables were more or less phased out by Digital Visual Interface cables. These connections came in various types, each with their own capabilities. Nowadays, DVI has itself been replaced by modern display cable types.

DisplayPort cables were designed to replace VGA and DVI cables, transmitting both video and audio signals. There are many versions of DisplayPort out there, all compatible with each other, and DisplayPort can also be used with HDMI and USB if an adapter is leveraged. Today, it is most commonly used to attach a monitor to another device.

The High-Definition Multimedia Interface cable is the modern standard for digital signals, with five different types of HDMI connections existing today. Chances are, you’re most familiar with Type A, although you may have seen Type C in the context of a digital camera, or Type D in the context of a mobile device.

Serial Advanced Technology Attachment cables form the connection between a storage device and a computer’s motherboard. They offer faster data transfer speeds as compared to their predecessor, the IDE (Integrated Drive Electronics) cable.

eSATA cables are effectively the same as SATA cables, just meant to connect to external devices instead of internal components. These connections aren’t as common anymore, as USB technology has outpaced their speed.

If you have a local area network, you’re using ethernet cables. These are the cables that connect your router to your modem and/or computer. They are quite easy to distinguish from other cables, as they have a very particular appearance.

Hopefully, you’re now more familiar with the cables that surround you every day - the question to ask now is, how well are they managed? If your office’s connections are a tangled mess, Accucom can help. Our technicians are cable management experts, so they can come in and organize your infrastructure to keep it organized and operational. To learn more, reach out to us at (02) 8825-5555.

Tip of the Week: How to Set Your Default Video Pla...
Is Your Business Leaking Data?

More posts from author
Wednesday, June 29, 2022 4 Things You Can Do to Promote Smartphone Productivity
Monday, June 27, 2022 What Can You Do to Cut Down Friction in Your Workplace?
Friday, June 24, 2022 3 Network Cable Best Practices

4 Things You Can Do to Promote Smartphone Productivity
Smartphones are a critical part of your business’ productivity, but sometimes you and your employees might have differing views on how to translate that productivity into profitability for your business. If you want to avoid the pitfalls as...
Read More