What Exactly is the Gig Economy? 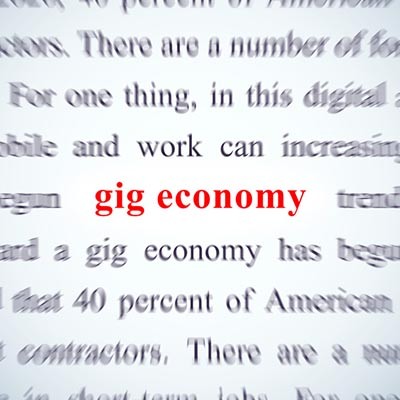 For the business owner, it can sometimes be a struggle to find the right talent to fit in with your existing staff. Today, more individuals are forgoing the stability of a full-time job and contracting their expertise out as a service. With the amount of freelancers growing by the day, we’ll take a peek at the Gig Economy (as it’s called) and how it has become the new normal.

A Brief History of Temporary Workers

Staffing agencies have been around for the better part of a century. The first staffing agencies were created in the 1950s to help women, who had been working during the war, to find part-time jobs once all of the war-related jobs were phased out. For the employer, it was a win-win, not only were they able to bring in a worker to meet the organizational responsibilities, they could fire this worker at any time, and were largely exempt from all the other issues that new hires often present, such as paperwork or employee regulations.

The fact that most of the temporary workers in the mid-20th century were women working in clerical positions changed as neoliberalism started to diminish the welfare state. This huge shift made temporary work through employment agencies a completely normal way to go about getting a job. Workers, once protected by various federal mandates, increasingly found themselves in or out of demand depending on the market trends.

As some of these markets began to grow more rapidly, there was a higher demand for workers. With Internet-based services launching, making it simpler for workers to work remotely, the amount of freelance or temporary workers has increased exponentially. Once a relative rarity, today there are as many as 150 million workers in North America and Western Europe alone that are controlling their own work destiny, by offering their services to businesses as outside consultants. The ever-increasing number of freelancers make up the Gig Economy.

The Makeup of the Gig Economy and Why They Do It

Surprisingly, it isn’t just millennials working freelance jobs. While many more millennials choose to be freelance workers, there are a lot of Gen Xers and Baby Boomers in the Gig economy. Many of the older workers state that they started working freelance after being laid off or suffering from some sort of medical ailment, rather than by choice. Millennial workers, who are well known to prioritize a work-life balance, work freelance to keep the inherent flexibility in their schedules.

Many gig workers find that the autonomy provided through their self-employment would sour their prospects of looking for traditional work. Some, however, simply do it as a subsidy for their regular job, or as a way to earn money whilst between jobs. Since the work comes with some risk, that is not having the stability that comes with holding a static job, many of the growing amount of gig workers tend to join placement companies who, for a small percentage of their take home pay, actively find these workers jobs.

The overarching sentiment from gig workers is that, there is a demand for experienced and proficient workers, and by being able to control how much and for whom they work gives them a lot more flexibility to achieve other goals, while still receiving enough money from the work to be able to financially support their lifestyles.

How Do Gig Workers Get Jobs?

Gig workers typically find work through the Internet, whether it be through apps (Uber, Instacart, Handy, etc.), through website-based bids, or through word of mouth. Companies of all types are constantly searching for the right fit, and to do so, are relying on other Gig Workers to build interfaces designed as a kind of freelance lineup where they will pick their workers for certain jobs. Unlike temp work in the past, however, the workers aren’t really looking for a full-time job, so finding a consistent worker may be a bit more difficult than your average business owner may realize.

Companies that rely on contracted per-job workers are finding that many of the costs associated with having full-time employees are reduced substantially by using gig workers. If there is a prevailing complaint that gig workers have, it’s that they don’t have the protections that full-time workers have. As a result, policy makers have been tasked with trying to first determine how these workers are working (full-time, by contract, part-time, etc.) and how are they being compensated.

Has your business started the process of using some of these millions of gig workers to fill in the gaps of your company? Do you find it to be a cost-effective resource of satisfactory talent, or a risky investment? Leave your thoughts in the comments.

How a Firewall Helps Protect Your Systems
As the data that you store on your business’ computers is valuable, it is inherently a desirable target to cybercriminals and scammers alike. This means that it is in your best interest to have comprehensive protections in place to protect ...
Read More